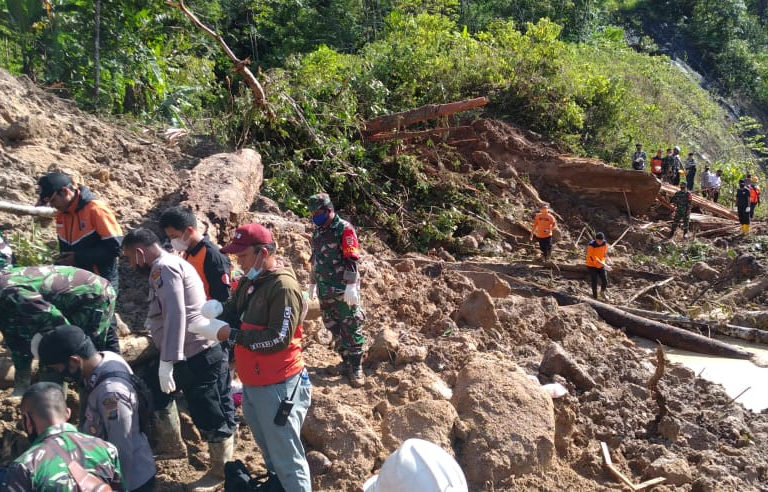 JAKARTA — Three people are reportedly dead and nine are missing after a landslide hit the site of a planned hydropower plant in the only known habitat of the critically endangered Tapanuli orangutan in Sumatra. At around midday April 29, heavy rains began pounding the site in the Batang Toru ecosystem in North Sumatra province. By the afternoon, it had triggered a torrent of mud that swept away workers and locals who were at the site at that time. On April 30, search-and-rescue teams managed to find three dead bodies — one woman and two children, all local residents. Nine other people are still missing, comprising six locals and three workers. Two of the workers had gone to the site to document the flooding when they were swept away by the landslide. This is not the first time the China-backed project was hit by disaster. In December 2020, a series of landslides struck the area. A 38-year-old local was swept away by the landslide while operating an excavator to clean up an earlier landslide. The excavator was reportedly later discovered downstream, but the operator, Afuan, was never found. A report about the December landslides in a database managed by the Ministry of Energy and Mineral Resources shows that the site of the incident is in an area with a medium to high risk of landslides because of high rainfall, hilly terrain, and poor drainage. Besides the risk of landslides, environmental activists and scientists have also flagged the area’s susceptibility to earthquakes, with the hydropower…This article was originally published on Mongabay