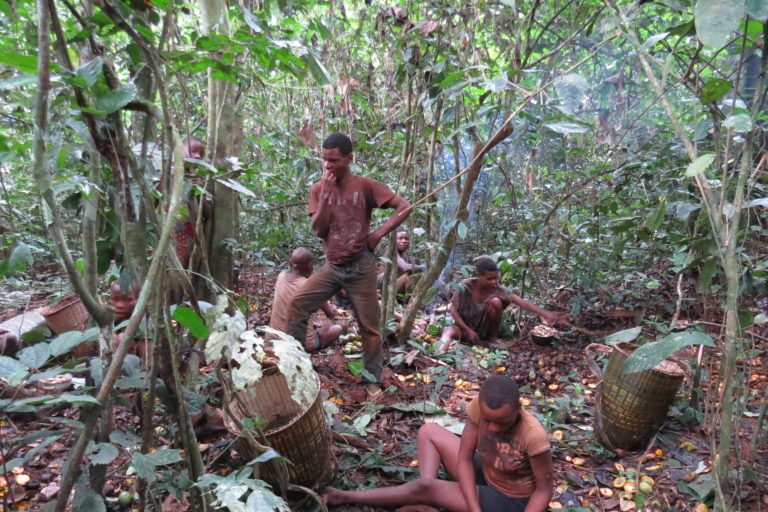 In Gribe, a village located in southeastern Cameroon, the Indigenous Baka of Dimgba are one of dozens of hunter-gatherer groups of the Congo basin diversifying their food sources to maintain a self-sufficient and sustainable lifestyle. The Baka, commonly referred to as ‘the forest people’, have been living in Cameroon’s evergreen and semi-deciduous rainforests for over 4,000 years. Around 831 species of plants including the Moabi (Baillonella toxisperma), a tree highly prized for its oil, are found in the rainforest. Researchers also estimate that it is home to more than 50 species of mammals. The Dimgba group depended heavily on the forest and its resources to sustain their livelihood. A Baka woman gathering fruits in the forest. Image courtesy of Global Hub On Indigenous Peoples Food System/Flickr. However, after the first world war, the French government implemented a zoning policy which forced Indigenous peoples, including the Baka in Cameroon’s rainforests, to reside in settlements along the road. The promotion of this policy continued on after Cameroon gained its independence, forcing the Baka to slowly relinquish their nomadic lifestyle. “Despite being aware of their collective rights to forest resources, [the Baka] are now constrained by a zoning policy that establishes areas for hunting, gathering and fishing,” explains a U.N. report on the Baka food system. Later in the 1990s, the Cameroon government established a zoning policy which further contributed to the Baka’s slow transition from a mobile lifestyle to a post-forager one. This divided the rainforest into non-permanent forest and permanent forest,…This article was originally published on Mongabay