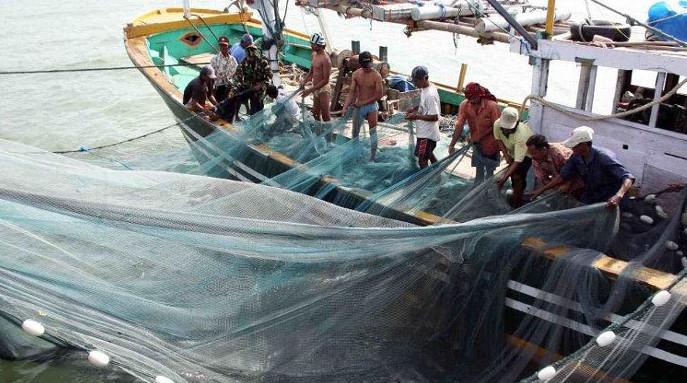 JAKARTA — Indonesia has once again enforced a full ban on the use of a group of seine and trawl nets that threaten the sustainability of the country’s fish stocks. The Indonesian fisheries ministry issued a new decree at the end of June that excludes several seine and trawl nets from being operated in the country’s waters. These are locally known as dogol and cantrang, midwater trawl nets (pukat ikan), and bottom otter trawl nets (pukat hela dasar). “This issue has become a global concern,” Sakti Wahyu Trenggono, the fisheries minister, said in a July 27 webinar. “If we keep allowing cantrang fishing to continue, we can prove that the Java Sea has been overfished and its coral reefs have been destroyed.” The fisheries sector in Indonesia, the world’s largest archipelagic country, plays an important role in supporting national and global food security. The country’s waters support some of the highest levels of marine biodiversity in the world, and the fisheries industry employs about 12 million Indonesians. The country is the second-largest fish producer in the world, behind only China. Summit of a seamount in the northwest Atlantic that has been fished with a bottom trawl. Image by NOAA/IFE/URI. The ban on these seines and trawls was initially imposed in 2015 by then-minister Susi Pudjiastuti. These devices are highly effective for catching large amounts of fish, but also extremely non-discriminative. A 2010 study by the Bogor Institute of Agriculture (IPB) showed that nearly 50% of cantrang catches were bycatch and…This article was originally published on Mongabay