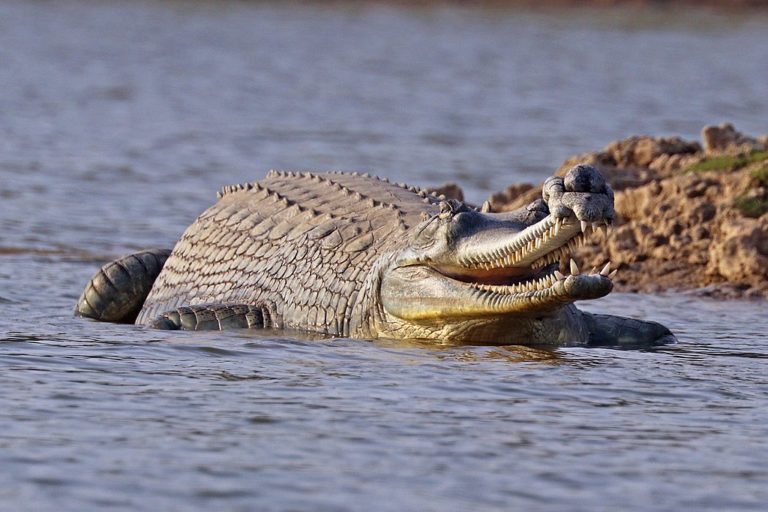 Gharials (Gavialis gangeticus), are a strange and unique crocodilian. Although they’re one of the world’s largest crocodilians by mass, they also have comically thin jaws suited for catching fish rather than pulling down deer or other large terrestrial prey. They’re a unique lineage possibly also including the tomistoma as its only other extant member. Once gharials lived throughout the Indian sub-continent and surrounding areas. Today gharials have been extirpated from Pakistan, Bangladesh, Myanmar, and Bhutan, suffering a population loss of approximately 98% since the 1940s. Inhabiting only about 2% of their historic range, most gharials today are found in India, with the largest population found in the Chambal River Sanctuary. This is understandably where most gharial conservation efforts are focused. However, populations of gharials in Nepal, especially the fragile but slowly recovering population in Bardia National Park should not be overlooked and deserve more attention. Gharials are fish-eating crocodiles that use their long slim jaws to catch their prey. Image by Julie Larsen Maher/WCS. New airports are being constructed in Nepal, aimed at bringing in more tourists. These make Bardia, with fairly recently improved bridge and road infrastructure more accessible than ever. Tourism is already a major economic force in Nepal, with a large chunk of it focusing on nature or ecotourism. Looking at major efforts such as Nepal’s success in growing tiger populations, it’s easy to think that this may have positive impacts on wildlife conservation efforts. Even as tourism is set to bring more attention to Bardia National…This article was originally published on Mongabay