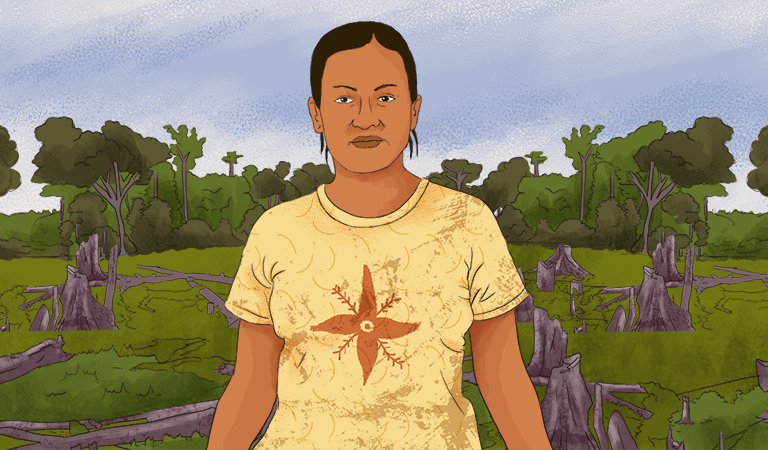 “They may kill one, two, three of us, but others will come to defend the forest, they will not exterminate us,” says Marisol García Apagüeño, an Indigenous Kichwa leader from the Lower Huallaga region of the Peruvian Amazon. García Apagüeño is the only woman leader of the Federation of Indigenous Kechua Chazuta Amazonian Peoples (FEPIKECHA). It’s a position that she’s proud to hold, but one that’s not easy, as she takes on the complicated and dangerous task of representing 14 communities threatened by illegal logging, drug trafficking, and a lack of land titles. García Apagüeño has served as the recording secretary at FEPIKECHA since 2018, when she was elected to represent the Kichwa Indigenous communities of the Lower Huallaga in Peru’s San Martín department. She uses the position to campaign for greater public awareness of Indigenous peoples’ issues and to denounce illegal activities using all her knowledge, including her studies in graphic design and computer science. García Apagüeño also established the community radio station Voces de la Selva–FEPIKECHA (Voices of the Rainforest) and supported the launch of a Facebook page for the federation, which has led to threats from criminal groups operating in the region. Kichwa environmental defender Marisol García Apagüeño in her community of Túpac Amaru. Image courtesy of Marisol García Apagüeño. “I keep knocking on doors and I’ve presented myself before the Inter-American Commission on Human Rights to speak about the dangers we face,” she says. “We’ve also met with human rights organizations because my people are threatened…This article was originally published on Mongabay